Walk through the grasslands of Killard Nature Reserve to the beautiful Benderg Beach, home to sand martins and seals. Perfect to spend a sunny day swimming, picnicking and investigating the rock pools.

This superb strand stretching just over half a kilometre from the rocks of Killard Point to the sand cliffs and farmland which separate Benderg from its more popular neighbour Ballyhornan Beach.

You may see seals lounging at Mill Quarter Bay, where the strength of Strangford Lough’s tidal run creates whirlpools. This is not the place to swim, leave it to the seals. A twenty-minute walk from here through the orchid-filled grasslands of the nature reserve leads to the Beach. Tucked out of the way of Strangford’s powerful tidal race here you can swim in crystal-clear shallow waters as sand martins swoop from the cliffs across the bay.

Getting there: take the A2 Shore Road out of Strangford. At Kilclief veer left towards Mill Quarter Bay. Park at the roadside lay-by from where signs point to the track leading into Killard Nature Reserve. Follow the path past the mouth of Strangford Lough. The rough track cuts through the grassland to Benderg Bay Beach. Roadside parking, no facilities, twenty-minute walk to beach.

Excerpt from Wild Swimming in Ireland 2016 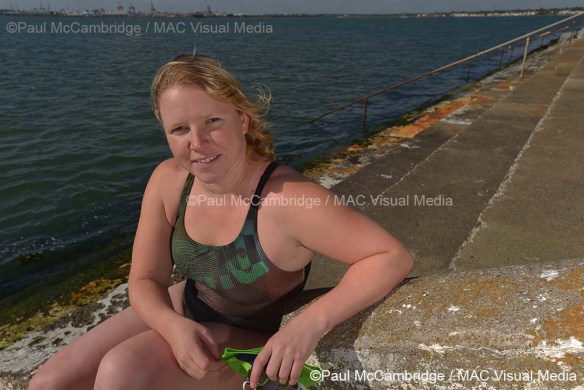 I first met Sabrina in September 2015 at the Copeland Islands swim, where she was the first

swimmer into Donaghadee Harbour after the choppy but fun 3km plus swim. The event that year

was in memory of my late friend, Sheena Paterson who loved the swim between the island and

harbour and I know Sheena would have been delighted that a woman won it!

Some weeks later, on a trip to sunny Dublin, Sabrina met with me at Bull Island for a swim interview.

season. As we prepared for our dip looking across the bay towards Dublin Port and the Poolbeg

chimneys dominating the skyline, Sabrina and I chatted about her swimming history. In her native

distance Front crawl swimmer. Shoulder injuries prompted Sabrina to give up the sprint Back Stroke

but her love of swimming pushed her on and she told me how, since changing to Front Crawl, her

shoulders have been fine.

Sabrina said she tried sea swimming, and despite still being a little scared of what might be in the

sea with her, she loves it. She joked that sometimes she closes her eyes so she won’t see the fish.

never looked back and continues to find new friends throughout the country.

As we carefully walked down the bank of steps into the sea we talked about the ice mile, “I don’t

know how many ice miles I actually swam before the event. I went home to Switzerland and trained

in the lake almost every day, it became easier!” Even with her record of achievements in long

distance swimming, when Sabrina applied to enter the Lake Zuric marathon event, she didn’t get in.

“I’m told people rarely get in on their first application, hopefully next year!”

Sabrina has certainly started 2016 off in a positive mode; well done, Sabrina in your latest feat of

matching the world record fastest female to swim a kilometre in 13minutes 58seconds, in water

And the best of luck for the rest of the year! 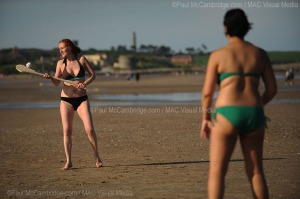 An early evening walk along the public right of way through the golf course, led us to the long strand at Donabate. Dotted along the beach were little family groups, a dad watching one son running in and out of the tiny waves and a younger boy perched high atop his shoulders. A bright picnic blanket in the distance made a splash of red against the pale sand, waiting for another family to return from their play in the sea.

I paddled through the shallows the water lapping around my ankles as I picked up and examined various tiny shells. The sand crunched beneath my toes and my sandals swung loosely in my hand, such simple pleasure. I could have been on any beach, anywhere in the world but for the next pair I came to meet.

A whimsical Irish sight; fiery red hair above freckled skin, bikini clad and wielding a hurling stick, she looked like a modern day, Irish Boudicca. I couldn’t have scripted such an encounter. Only in Ireland, aye but here’s the rub, neither of the hurling players were Irish. They were in fact, French!

Speaking in perfect English, Severine told me how she’d been in Ireland now for several months and had recently bought the hurling sticks as a souvenir of her time here. This quiet beach was the perfect place to hone their skills. Running and laughing as they passed the sloitar between them, trying to keep control of a steady volley back and forth, their game continued long into the cooling evening. As I left them and walked back along the boreen through the golf course, I could hear the gentle crack of leather on ash as it echoed across the strand. 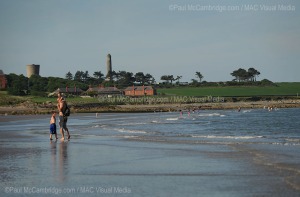 12 miles north-east of Dublin, the town centre is served by both train and bus routes from Dublin.

Nearby Newbridge Demesne is a Georgian mansion built for Charles Cobbe, Archbishop of Dublin, in 1736. It sits on 370 acres of eighteenth century parklands with woods, lawns and wildflower meadows. The estate is now a public park used year round. Newbridge House was a location for the 1965 film The Spy Who Came in from the Cold, starring Richard Burton. 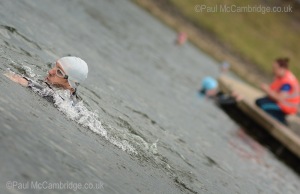 Up on a hill overlooking Derry City lies Creggan Country park, the site of an old reservoir which is now used for water-sports and fishing. As I crested the hill I got my first glimpse of an interesting building, slate walls and a green roof lifted my hopes that this could be an oasis in the midst of residential housing.

A crowd was milling at the entrance and I joined them to introduce myself to Mervyn, one of the Northern Velocity coaches. With changing rooms and showers above the gated lake this is not a wild swimming area, but it does provide a safe training zone for those wishing to venture into the open water. The water quickly becomes deep and each of the wet-suited swimmers scanned their micro-chipped armbands as they made their way in to swim the 1km loop, with the swimmers content to swim at their own pace a couple of kayaks paddled out as safety craft.

The advantage of Creggan is that it is compact and swimmers are always visible from the slipway, marker buoys form a loop that never sees the swimmer too far from the shoreline. Beside the concrete jetty new swimmers can slip into deep water yet be coached from the side before venturing out into the main body of the lake for their first lap. This is the opportunity, for some the first time, to experience the lack of visibility in lake swimming. The shock of colder water – (some swimmers will never again say an indoor pool is cold!) and the feeling of exposure in a much larger expanse of water than previously experienced. 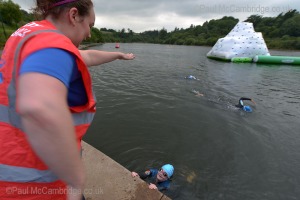 Ranks of inflatables and kayaks moored up create a separate area for these test swims and the large zorbing balls and great green and white climbing pyramid show this site is well used by young and old.

If you want a play session for yourself and the kids, check out the Country Parks activity program and if you want a safe, well-marked training area they can give all the times when swimmers are welcome.

When an acquaintance told me of her “mad Aunt” who swims in the sea every day I simply had to meet this like-minded soul.  A phone-call later and I met Maureen the following week.

Mo lives in Jordanstown and swims daily throughout the year, her summer months she spends on Island Magee in a beautiful cottage looking down onto Portmuck harbour.  The view is stunning with the small, old-fashioned harbour built into a natural cove, cliffs protecting it on each side.  Seeing this rugged shoreline with the harbour wall curving out into the sheltered cove, my heart rose.

Mo was waiting for us in the car park, a retired teacher, she oozed life and vitality.

It seems many of the people who own holiday cottages here have spent their summers since childhood at Island Magee so there is a great family atmosphere.  Mo’s son and a friend had, on the previous weekend, raised over ten thousand pounds for Cancer Research, jumping from the harbour wall every hour on the hour, in fancy dress.

We stripped to our swimsuits and walked down the slipway into the cold water.  Swimming a gentle breast-stroke out past the wall where two fishermen wished us good morning – I felt transported back in time to the 30’s, a more simple life were the daily constitutional would have been a pleasant swim like this.

We swam across the bay towards the White Cliffs, an un-concerned Oystercatcher and some Cormorants bobbed along, ignoring us.

The water felt silky as it glided over my skin, the shock of cold had worn off.  I felt connected to the landscape, submerged in it, listening to the sensations of my body, the air and the water touching my skin, the slight movement of the sea hinting the strength in the tide that the calm surface belied.

The sun glinted on the surface as we retraced our course back into the harbour, the shallower water was a little warmer.  We dressed and went back to Mo’s cottage where we sipped tea and nibbled buttered Barmbrack in front of a log fire.

I finally had to leave this idyll and made my way toward home with the promise to return, very soon.

Portmuck Harbour is well sheltered and provides a beautiful swimming area but be aware of strong tides outside the harbour and around Pig Island where it is not recommended to swim.