Arriving at Donaghadee at a few minutes after 10am on the 1st day of 2018 and the carpark at the slipway was almost full. As more and more joined the gathering throng calling out “Happy New Years!” the festive atmosphere was buzzing at the water’s edge. 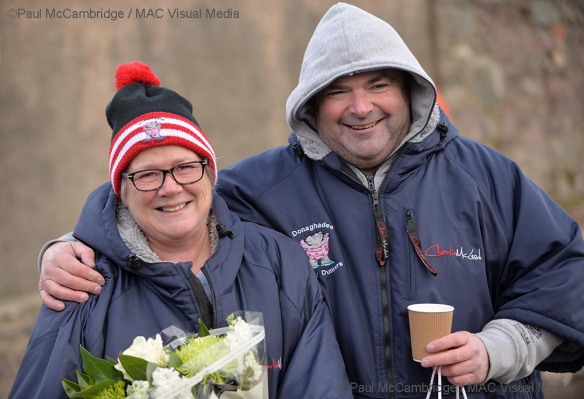 For several years Martin has been swimming regularly here, and the numbers of like-minded folk have swollen year on year. With flasks of tea, coffee or hot juice the regulars welcome all. We all pause rubbing our hands with a shiver in anticipation of the cold plunge to come. 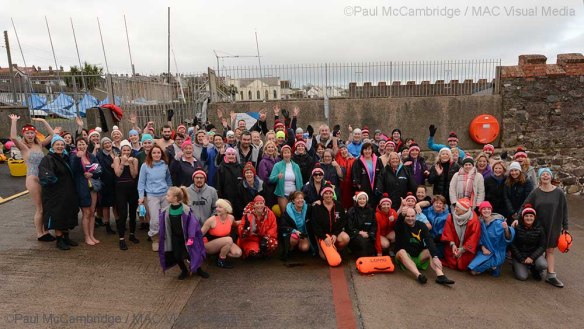 A group photo and then the “Dunk” was open, encouraged to only swim as far as comfortable, 77 of us made our way down the slipway Mark Brooks’ Pink Flamingo provided a marker to follow.

Another swimmer towed a jolly Santa and the festive cheer was not dampened by the light skiff of rain that briefly flitted across the harbour. 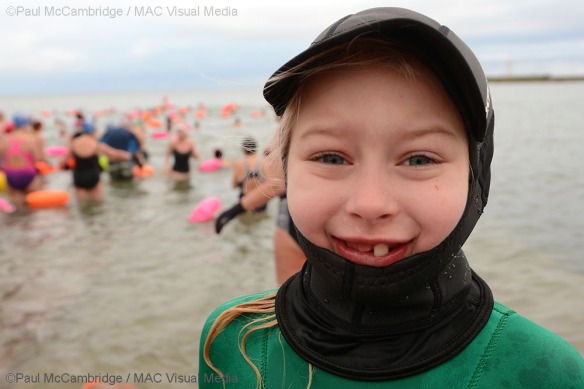 Marrissa, the youngest Dunker enjoying a pre-birthday dip – despite having lost a tooth only a few hours before! I hope the tooth Fairy is generous! 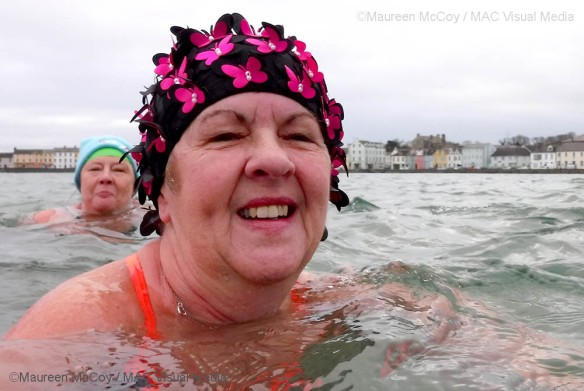 Sporting a mixture of headwear; bright and flowery swim caps, woolly hats, even a christmas pudding hat, the Dunkers have once again managed to raise a great amount for charity on this the 12th of their Christmas Swims. 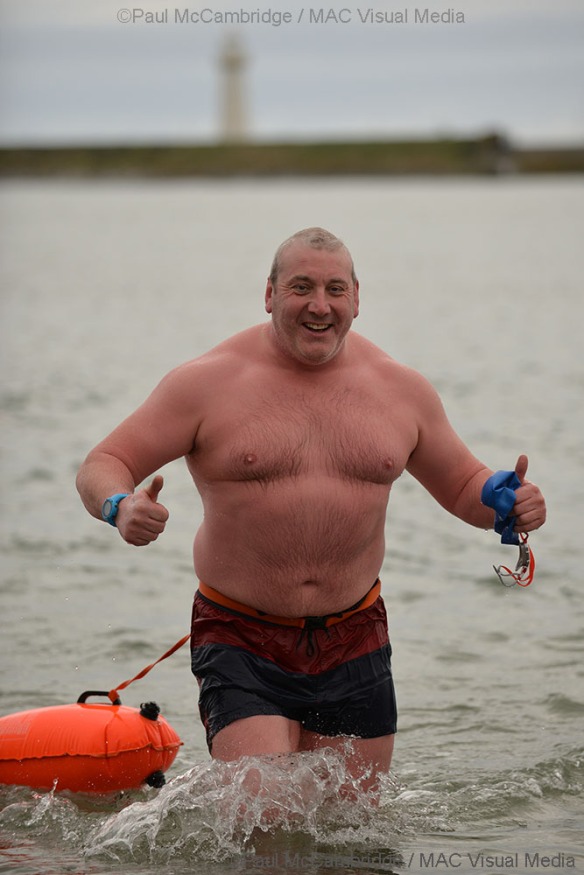 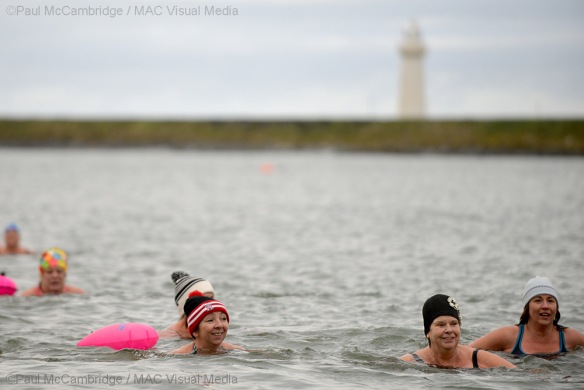 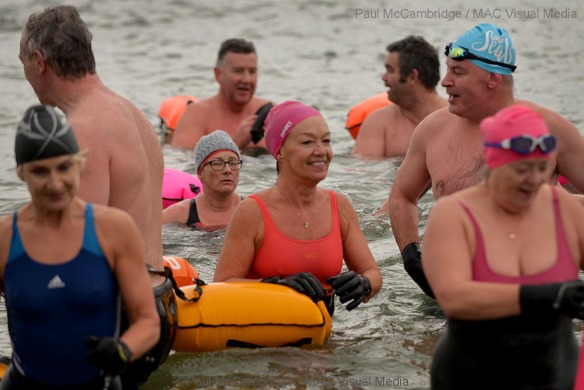 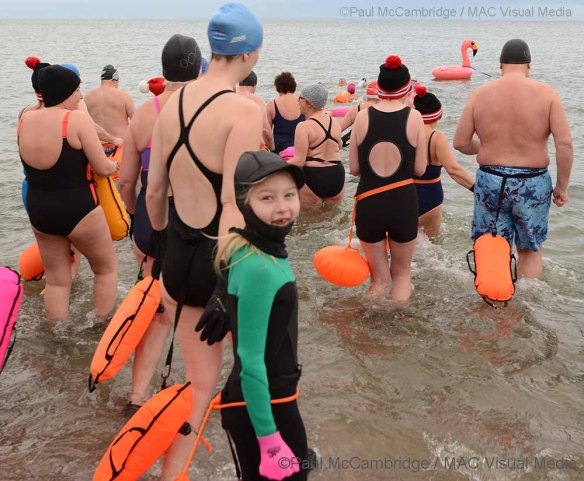 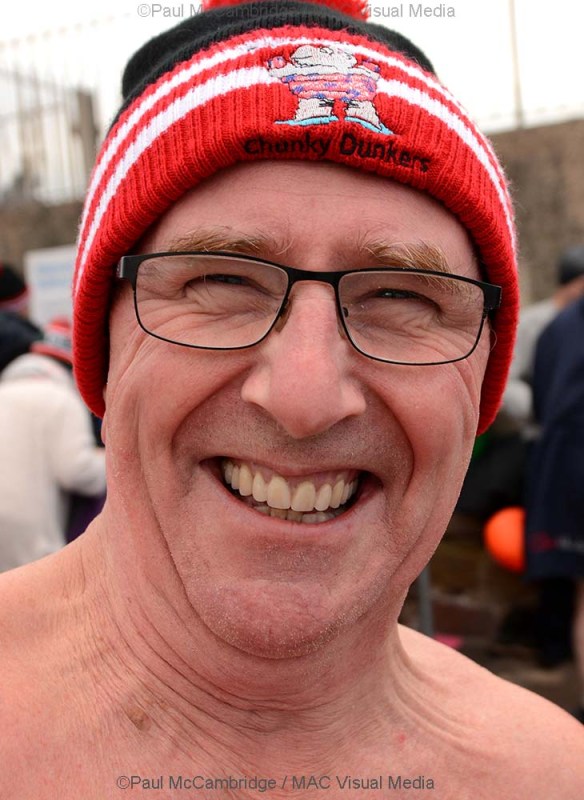 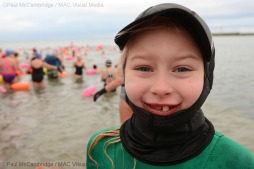 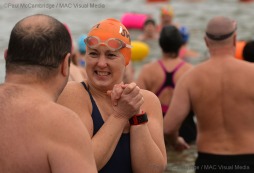 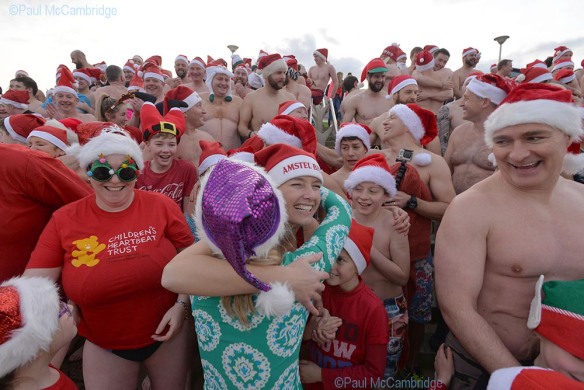 Portrush’s East Strand was a hive of activity when I arrived. I did wonder where I should go to register for the swim but the steady stream of people all sporting various Santa hats assured me I was at the right place. It looked as though most of Portrush had turned up, all bedecked with festive regalia besides the customary hats. One chap had an extremely smart Christmas jacket, there were many woollen jumpers and in the crowd I spied a very fetching reindeer onesie, I may have to ask Santa for one of those myself… cosy after a swim.

I followed the surging crowd and we wound our way along the prom towards the Arcadia Gallery and small beach. Up the steps facing the beach at Café 55° North the queue condensed as we all pushed our way to sign up for the swim and pop a donation in one of the many buckets. This year, the 8th of the Santa Splash, the chosen charity was the Children’s Heartbeat Trust, a local charity.

Over the past 7 years the Arcadia Bathing Club have raised several thousands of pounds for various charities. Each year they choose a charity that someone in the club has links to.

The first Santa Splash was very low-key, just a few pals asking for sponsorship and taking a dip at the Arcadia beach. Each year the numbers grow and they have had to move to the East Strand because Arcadia beach isn’t big enough!

Little islands of discarded clothing soon formed on the sand and we crowded on the steps for a short pre-swim brief, I’m afraid I have no idea what was said but next I knew the hooter sounded and we all began to race down to the sea. Photographers braved the stampede of swimsuits and Christmas hats as several hundred charged, one aim in mind, hit the water running! 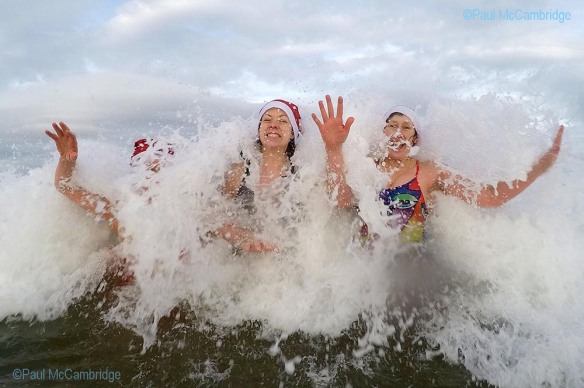 The Santa Splash is certainly the biggest Christmas dip I have seen with a massive crowd cheering from the side lines. Once dressed the party went on at 55° North with hot food and mulled wine being served to the swimmers, music and a raffle.

Stephen, chief organiser on the day, told me a little about the ABC. Formed as it was many years ago it was recently resurrected by Stephen and several pals. “We used to have silly rules, like no over-arm strokes in the summer months. In the winter you were allowed swim front crawl to keep a bit warmer. We’ve abandoned that as now we have so many swimmers!”

ABC swimmers meet every Sunday, 10.30am, all welcome but to get a member’s certificate and be eligible to buy their fleece you must swim a minimum of once a month for twelve consecutive months. I might just try that…I do like their swim cap!

Thanks Arcadia for a great splash see you very soon! 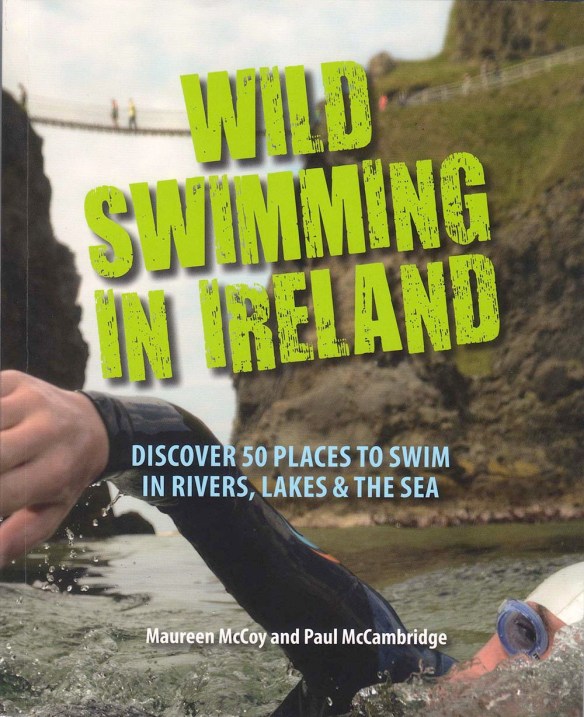 for the discounted price of £14.00 + postage and packaging

Signed by both authors.

We have a limited number of SIGNED books left, so why not treat someone to our ‘glove compartment-friendly book’ sold here for £14 + £2.80 postage.

Book of the Week – “Like David Walsh’s excellent Oileáin which […]  contains much for general readers and dreamers too, Wild Swimming in Ireland is a serious guide book but also an enjoyable and informative read for any hibernophile.” Irish News

“When the sun shines, there’s nowhere better for an outdoor dip than Ireland. Here are 10 sweet spots for your swims…Here’s a book with summer written all over it… Irish Independent

“Wonderfully illustrated and […] conveys the sense of adventure involved in swimming in an uncontrolled environment like the sea.”– Irish Mountain Log

“There’s a sight you will see in Ireland that you won’t see elsewhere: diving boards! Authors Maureen McCoy and Paul McCambridge guide us to their top 5” –  Outdoor Swimming Society and ‘5 best places to swim in Ireland’ –  OSS

“The book is full of practical information to make wild swimming safe and invigorating for everyone, whatever your swimming ability.” – Irish Swimmer 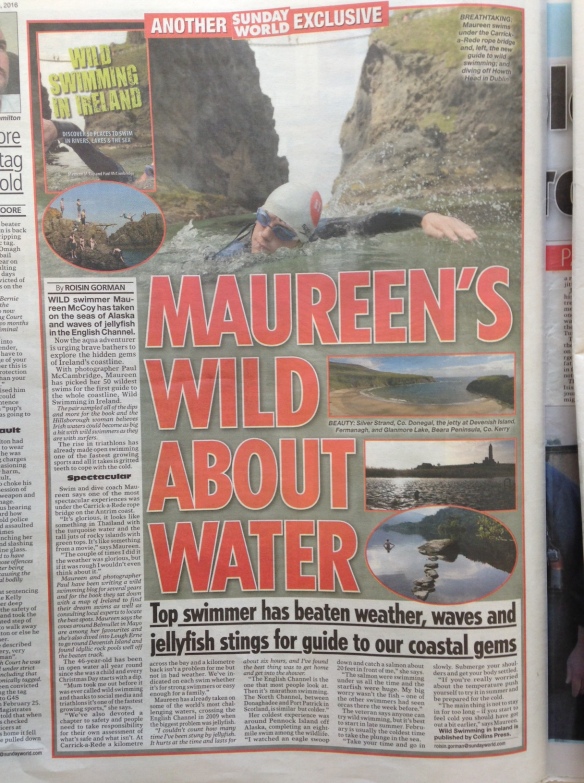 From the car park at Tollymore Forest follow the River Trail under the impressive stone arch and follow the stream as it chatters on its way down to meet the Shimna. The first of many pools sits just below a small waterfall and bridge, pleasant for swimming with broad flat rocks on the edge.

Continue walking upstream and in a matter of minutes you come to the Hermitage, perched on the edge of the rocks, this whimsical folly leads you through tiny medieval style buildings.  The open windows look down into the miniature gorge beneath and a deep pool that curves around the rocks.  Follow the path through each room to a low, castellated wall, step over and climb down the rocks to the pool.

Allow your imagination to run wild as you swim downstream, under the turrets of the Hermitage, looking out for trolls or other dangerous creatures hiding in the crevasses! Returning upstream, the light, dapples as it breaks its way through the trees to play on the waters’ surface. As you approach the top of the pool the flow of the water increases as it spills from the river above, forced into a narrow channel. With the thrill of fast moving water bubbling past your ears, swim hard towards the fall into the melee of churning water, a natural jacuzzi, then relax and let the force sweep you back to the calm of the wide pool.

The little row of charming buildings tends to bring out the child in each of us, the urge to duck through the low doorways and play games of knights and castles. They never fail to bring a smile to my face and it’s lovely to think of the thousands who have sheltered from the rain in them since they were built in the 1770s by James Hamilton, 2nd Earl of Clanbrassil, in memory of the Marquis of Monthermer.  In those days gone by the ladies would shelter inside while the gentlemen fished for salmon in the Shimna below.

Children will love exploring the path and buildings and for a longer walk continue on up the river where there are many more pools to explore. A full day can be spent happily walking the many paths of this superb park.