Dublin City and its swimmers are justly proud of this iconic event now about to celebrate its 100th birthday. With Jack B Yeats 1923 painting “The Liffey Swim” the inspiration for a re-enactment photograph in which Yeats had won an Olympic medal in 1924. A crowd of swimmers and spectators assembled at Custom House Quay dressed in period regalia. Some boarded the vintage tram carriage (one of Irelands last remaining) overlooking the water, while others lined the foreground, craning over the wall to wave and cheer the swimmers below.

Six past Liffey Swim winners had the honour of this pre-event dip, including Siobhán Hoare-O’Driscoll, Ladies winner in 1991. They waved up to us on our high perch as we cheered, holding onto our hats lest they be blown into the river!

The Dublin skyline and port has changed significantly since Yeats day as has the swim. For many years it was the men’s domain but in more recent years women have been coming to the fore.

This year, on the 100th Liffey swim, the organisers expect more than 500 participants, all of whom have had to swim six of Leinster Open Sea Swimming qualifying events to be eligible for a place. 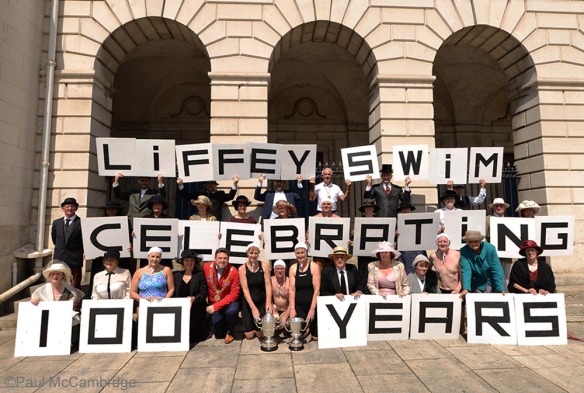 The swim itself is on 3rd August and swimmers will start at Rory O’Moore Bridge for the 2,200m swim, passing under 11 of the City’s key bridges to finish at Custom House Quay;

A commemorative stamp depicting Yeats painting and celebrating the centenary will be available from 1st August from An Post. 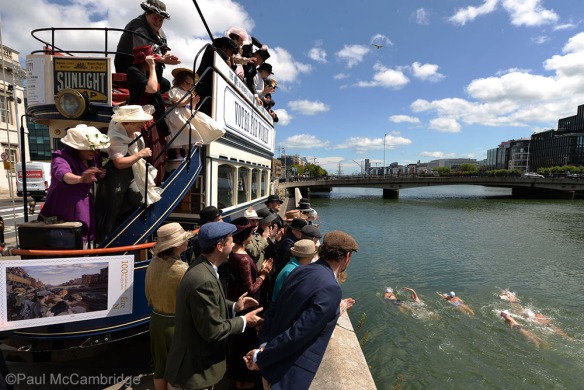