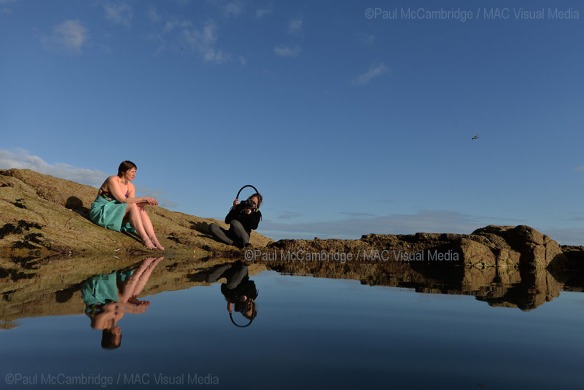 Dublin City has a great tradition of alfresco swimming and further south from the famous Forty Foot, on the Vico Road the pretty area of Dalkey boasts a similar bathing area, The Vico nestled along the cliff edge between Dalkey and Killiney beach, is popular with naturists.

Early March this year I travelled back to the Vico, invited by some documentary film-making students from Trinity College. We were lucky, the previous week had been grey and windy and yet the weekend brought with it sunshine, interspersed with the odd shower, perfect spring swimming weather. When I arrived I found the crew had already spent several hours before, setting up time-lapse cameras and planning the story. It’s a little un-nerving having someone new behind the camera, I’m used to photos, not so used to being filmed but variety is the spice of life! Several walks up and down the approaching path certainly warmed me up before I was to get into the water. As the day wore on the regular patrons filtered in and away, stopping for a quick chat, sharing more favoured spots around the country and commenting on the mild weather. “Have you had your swim then?” the constant question, “Not yet, but it’s coming!” As the day faded to evening and the sun sunk ever lower it was time to brave the sea. My last swim that week had been in a lake in the Mourne mountains and had been acutely painful it was so cold, I was now rather nervous that I may squeal and shiver uncontrollably, all to be documented on camera! Joy, the water was not as sharp as that mountain lake. As I swam under the craggy rocks of Hawk Cliff a seal popped his head above the swell some way further out. He’d spent the day milling around, a little curious but otherwise unconcerned with the small stream of swimmers who had been in and out of the sea all day as the tide rose and fell away again. He seemed much less interested in me than I in him.

Once dressed and just before I left the Vico I looked out to see a pod of porpoises gliding through the water, their dorsal fins slicing the small waves as they passed back and forth across the bay. Below me the final evenings swimmer, a lady around my own age, side-stroked along the shoreline, swimming with ease and un-encumbered by swimwear. I admired her bravery as she finished her swim, climbed out, dried and dressed, unabashed, then made her way back up the long flight of steps in the evening light.

A narrow gap in the wall along the Vico road walking up the hill away from Dalkey marks the entrance to the path which first goes across a high-sided footbridge over the railway and then down towards the shore. Surfboards line the railings and the small white-washed shelter built into the rocks stands out against the grey stone. Handwritten on a board the words ‘swimwear optional’ and the white painted shelter above the ladders welcomes you in. Steep steps with handrails lead you to the water and to one side a small sea-water pool mirrors the sky, a sharp contrast to the choppy sea.

Getting there; by car from Killiney take the Victoria then the Vico Road past Victoria Park. At White Rocks Bathing Area there is a lay-by with car parking spaces. Frome here walk as there is no further parking along the road. Heading towards Dalkey as the road sweeps left and drops down look out for the narrow gap on the sea-ward side, take this path across the footbridge and down to the Vico Bathing Area.