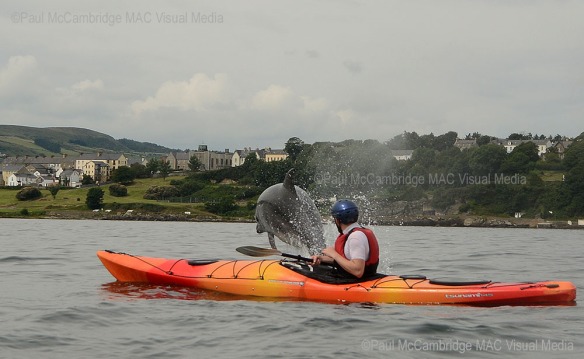 The sun was shining on lough Foyle as a small crowd gathered at the harbour. Keen long distance swimmers and some completely new to open water were there to brave the sea on the 3rd annual Moville Lighthouse swim – 1.2km out from the harbour, around the lighthouse sitting pretty on its stilts and back to the slipway.

As the 38 swimmers, mostly “skins” (normal swimming togs) with just a few in wet-suits, walked down the slipway to ready themselves for the start of the race, an audience of family and friends cheered them on. Kayaks sat a little way off waiting to guide the swimmers and out near the main channel rescue boats hovered. As the field began to spread a huge container ship sounded its horn as it slipped on down the Foyle. 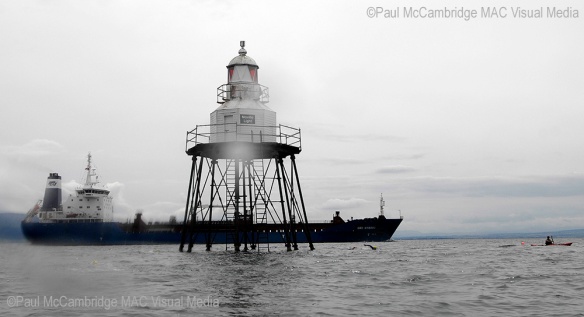 The organiser Peadar’s comment before the swim, “Those of you not racing for a fast time, when you get to the lighthouse just take a moment…look back at the scenery” was ringing in my ears as we watched the swimmers finishing and a pod of Dolphins appeared, jumping and riding the wakes of the safety boats.

A spectacular show followed and I was jealous of the lucky devils out there in boats and kayaks with those magnificent creatures showing off around them.

My apologies now to the swimmers, you did great but the Dolphins stole the show!

Certainly this event will continue to grow in numbers, it’s a beautiful swim, well organised and I am keen to sign up for next year, especially if there is a chance that the dolphins might return and I will be taking a camera with me!

“Moville Lighthouse Swim completed today. Can’t believe a few months
ago I started swimming. If you had said to me I would have done a
triathlon and an open water event, I would have laughed out loud. To top
off the swim today I was literally swimming with dolphins. Happy Happy
Happy.”

“Congratulations , another superb event . We are getting bigger and
better each year , the dolphins were a master touch!”

“…a great swim today.  I had the added bonus of swimming with the
dolphins for part of it. I look forward to next years’ swim.”

“Mammy, when will I be old enough to swim around the Lighthouse like them?”  – Comment by 5 year old boy to parent