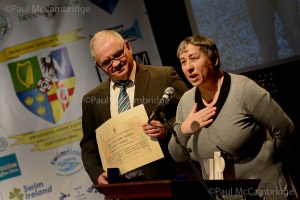 Even our own award winners’ achievements over the past year pale before these two and their myriad swims. Alison, amongst many other swims, has 43 English Channels, including being the first woman to achieve a triple crossing, and 3 North Channels, also the first woman and the first to swim Scotland to Ireland. Kevin has 34 English Channel swims, including 3 doubles, and 3 North Channels. Both have other swims too numerous to mention.

Alison had me in awe of how she can be so humble now about her phenomenal achievements, but as she told us that evening, that part of her life is in the past. Alison was genuinely pleased and surprised at receiving a standing ovation and said she has a soft spot for the ILDSA and the Irish, who have always made her feel very welcome and she wanted to thank everyone for supporting her in the past.

Brian Meharg, Master of Ceremonies, told me how he has been good friends with Alison since she first came here to swim the North Channel and related how, on her last swim in 1997, Brian’s wife Carina was pregnant and already a week overdue.  Brian smiled as he told me he was torn between staying home for his “fatherly duties” or heading out on the swim.  So, he headed on the swim and, as Carina waved them off, Alison firmly told her not to have the baby until after the swim was completed, adding that she would prefer if they both waited till Alison’s own birthday, 29th August.

Against all odds the dutiful baby did indeed wait and Rachel Alison Meharg arrived a further week late to share her birthday, and her name, with Alison Streeter as requested. 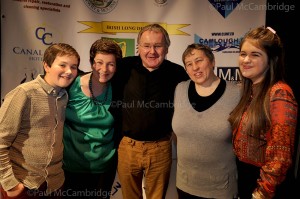 The swimming part of Alison’s life is now firmly behind her and she has moved on to pastures new, breeding Alpaca on her farm in Wales and following her own spiritual journey. Animated, she chatted about her two new baby Alpaca and the exquisitely fine wool Alpaca hair produces wholeheartedly laughing as Carina described her own dog as “My baby!”

Looking at Padraig Mallon standing with King of the Channel, a comment reached my ears. “Padraig could be a clone of Kevin, separated at birth by a few miles – and years!” Perhaps a degree of similarity can be seen between the two, I’ll allow you to make your own decisions on that.  As Padraig is beginning his adventure in ever more challenging open water events, he clearly shows a great respect for a man who has wealth of knowledge. 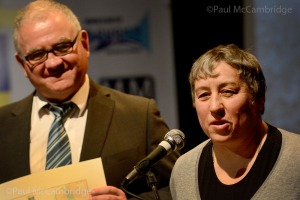 Alison’s genuine words of encouragement to the gathering made me smile, although I do not quite believe her statement; “Anyone could do what I have done.” And, “Perhaps I have a great deal of bloody-mindedness!” It was nice to hear how she felt so welcomed in Ireland and that was why she kept coming back, Mercedes Glietze I believe, said something similar, even our bitter cold and hated jellyfish didn’t put these great ladies off!

With such a small community here in Ireland, there is a great mix in the swimming world with the uber-endurance swimmers rubbing shoulders (sometimes literally) with the sprinters and the leisure swimmers – many of us would see ourselves in more than one category – we all enjoy the great outdoors, and all deserve the hot chocolate/hot toddy after, the community spirit growing ever stronger.

Cus D’Amato said of a boxer, ”Knowing what he goes through, the very act of climbing into that ring stamps him a person of courage and discipline,” same could be said of these swimmers awarded by ILDSA, the open water, their boxing ring.

This site uses Akismet to reduce spam. Learn how your comment data is processed.